Copper Moves To 15 Month Low As Strikes And Closures In Chile, India And Beyond Continue To Weigh On Industry And Business Practices

Copper continued its downward trend, falling to a 15-month low below $4 per pound amid mounting fears of a global economic slowdown caused by aggressive tightening by major central banks and persistent coronavirus outbreaks in China.

The third most used metal worldwide is copper. More than a third of the copper produced worldwide is produced in Chile, which is followed by China, Peru, the United States, Australia, Indonesia, Zambia, Canada, and Poland.

China, Japan, India, South Korea, and Germany are the top importers of copper.

The over-the-counter (OTC) and contract for difference (CFD) financial instruments form the foundation for the copper market. 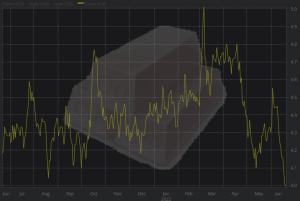 In the meantime, after Codelco, Chile’s largest copper producer, announced the closure of the problematic Ventanas smelter, its employees said they would start organizing for a nationwide strike.

India Instability Events On A Rapid Rise From Corruption…

Today Vedanta LTD. (NSE: VEDL)  fell more than 12% after the Indian group put a copper smelter up for sale. The complex was the location of the deaths of 13 protestors by police and has been shuttered for four years. In May 2018, Vedanta received a directive to close its 400,000 tonnes per year copper smelter in Tamil Nadu, a state in southern India.

Following a week of violent demonstrations over the company’s plans to increase the plant’s capacity—which residents claimed would pollute their air and water—the decision was made.

The smelter was run by Vedanta’s subsidiary Sterlite Copper, which is owned by billionaire Anil Agarwal. Vedanta has engaged in numerous legal battles to reopen it. The country’s Supreme Court is now hearing the matter, although no date has been set.

India’s output of copper was reduced by over half as a result of Vedanta’s smelter closing, making it a net importer of the metal.

According to a government statement, over the first two years of the shutdown, refined copper imports increased more than three times to 151,964 tonnes in the fiscal year that ended in March 2020, while exports decreased by 90% to 36,959 tonnes.

Crypto Crash – Are We Having Our First Real Time Recession? Florida And Texas May Have A Problem.